It’s been an interesting year as we’ve moved from Hanby and Barrett to Excavate. We’ve lost a Hanby but gained a number of new faces to join our team of associate artists, many of whom will be working with us on projects next year. And, amongst all this restructuring, we’ve managed to do a fair amount of work as well.

We launched the I Worked At Raleigh website and smartphone app, receiving a lot of national press attention in doing so. And we also launched Songs of Defiance, by The Army of Redressers and The Rise Choir, and An Act of Defiance, a film about the Luddite uprisings in Ashfield. And our investigation into the Luddite movement culminated in a reworking of our show The Hammer of Defiance for performances at the Galleries of Justice as part of the Subversion and Rebellion Conference in Nottingham this November.

We did some development and dramaturgical work with Arletty Theatre for their Swan Canaries show, which has been on a very successful tour; did a talk for the East Midlands Oral History Society and for the Transported programme on creating heritage based and site specific performance; gathered stories from people in Lincolnshire who remember living next to the Bomber Command airfields during the war; interviewed some of those connected with the conscientious objectors movement in Holton cum Beckering; and created The Old Dogg at The Mint with the Grantham Dramatic Society, a new script about Sir Isaac Newton’s work as Warden and Master of the Royal Mint which we held a rehearsed reading of for the Gravity Fields Festival. We also began working with Charnwood Arts on developing a new performance based on the Zeppelin attack there in 1916 which killed ten people and wounded many others.

We moved into a new office in Hockley run by City Arts. Our work around Raleigh was the basis for a chapter in the Routledge International Handbook on the Arts and Education. And finally our increasing work on developing international partnerships lead to us travelling across the Netherlands as part of the Caravan of Dreams project for the International Community Arts Festival in Rotterdam; submitting a large application to Creative Europe for a project with the University of Lincoln and four community arts companies in the Netherlands and Germany; and returning to Rotterdam to take part in the TANDEM cultural managers exchange.

We are very close to announcing three or possibly four new projects for next year, but we can’t quite do that yet. So watch this space. Thanks for your continued support. Have a good festive season.

We have just moved into our new office at 11-13 Hockley (there’s a rather large bird outside our door), in a four storey building run by City Arts. It’s a great space which will be developing over the next year or so, and we’re looking forward to bumping into the City Arts team as well as the other artists who are based here. With two good cafes down the road, Desi’s next door, and Bunkers Hill a minute’s walk away it looks like we’ll be spending a lot of time down here in the Creative Quarter.

We are currently taking part in this, in Rotterdam.

The Hammer of Defiance tickets on sale

Tickets for our show The Hammer of Defiance, featuring The Rise Choir and The Army of Redressers are now available from the Galleries of Justice. The show – which tells of the Luddite rebellions in Ashfield in 1811 – takes place in the building where the men were tried for their action, the first trial to be held following the infamous Frame Breakers Bill that Byron had spoken out against.

The show is part of the Subversion and Rebellion Conference, being held by the University of Nottingham as part of the AHRC Being Human Festival.

The Routledge International Handbook of the Arts and Education

Our work with the University of Nottingham around the stories of ex employees of Raleigh, and the creation of our touring community show ‘A Lifetime Guarantee’, is featured in this book that will be published next month and which brings together leading writers on Arts in Education to provide an authoritative guide to the main debates in the field and an informed account of contemporary developments in policy and practice.

As the blurb goes on to say ‘Providing a detailed overview of key concepts and practical challenges, the book combines theoretical insight with specific examples of innovative projects drawing on theoretical, historical and empirical research perspectives to inform understanding. The range of content highlights the breadth of the field, addressing such issues as the importance of community arts and partnership as well as school education, and providing insight into developments in multiple and connecting arts as well as traditional art forms. Topics such as assessment, creativity, cultural diversity, special needs, the arts in early childhood, adult education, arts based research, are all addressed by recognised authorities in each area. The collection of chapters also serves to define the field of arts education, recognising its diversity but highlighting the common elements that provide its identity.

The collection addresses generic issues common to all the arts while acknowledging differences and recognising the dangers of over-generalisation. It also includes specific chapters on each of the art forms (visual art, dance, drama, literature, music, media arts) providing a cutting-edge analysis of key contemporary issues in each subject.

Bringing together specially commissioned pieces by a range of international authors, this Handbook will make an important contribution to the field of Arts Education’.

You can pre-order a copy here, but as it’s £125 you may just want to wait for us to post up the article for free as soon as we can.

Excavate has been selected to take part in the TANDEM Partnership Forum in Rotterdam from the 26th to the 30th of November. TANDEM is an exchange programme that assists cultural organisations in developing long-term working relationships, knowledge development and networking opportunities with project partners from Europe and beyond. The aim of the programme is to connect and inspire cultural managers by supporting the sharing of knowledge and experience across geographical and cultural borders.

Over the five days we will be working with companies from Belgium, Germany, the Netherlands and the U.K to investigate working models and practices, and to devise potential collaborative projects. Other companies that have been invited include Brouhaha, the Arcola, 5ekwartier and Tanz Tangente.

Here is some more information about the programme.

The Hammer of Defiance Reboot

Following on from the success of The Hammer of Defiance in Kirkby in Ashfield last year, we have been asked to rework the show for three performances at The Galleries of Justice this November as part of a Rebellion and Subversion conference which is being hosted by the University of Nottingham in the city.

Our work with the Grantham Dramatic Society over the last months culminates this weekend with a rehearsed reading of The Old Dogg at The Mint at Grantham Museum on Sunday 28th from midday as part of the Gravity Fields Festival. This play examines Newton’s thirty years as Warden and then Master of the Royal Mint and is the culmination of many weeks of research, writing and drama workshops.

I Worked At Raleigh smartphone app 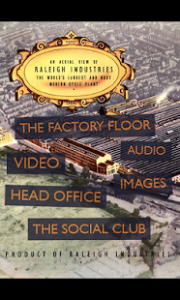 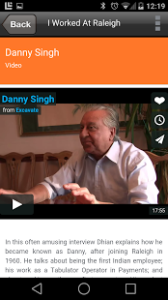 The newly updated I Worked At Raleigh smartphone app is now available for android and apple devices. It’s free, has had a number of issues fixed, contains more information and takes up a lot less memory. We’re really proud of this. It allows the user to navigate themselves around the old Raleigh site and access peoples stories and memories of the various buildings and departments that have been mapped onto the streets where they used to stand.

Sadly Carole Mallia, who was a key partner in this project and who worked with us on all of our various Raleigh projects, has recently passed away. We’d like to offer our condolences to all of her friends and family.

We are about to start working with Charnwood Arts to develop a centenary community performance project based on a zeppelin raid in the town which killed ten people on the night of January 31st 1916. (The shrapnel marks can still be seen on Empress Road). Over the next three months we will be working with volunteers to carry out research into the attack, carry out site visits, gather the folklore surrounding the events, and road testing projections all with an aim to create a basic narrative for a project which we will then seek funding for.